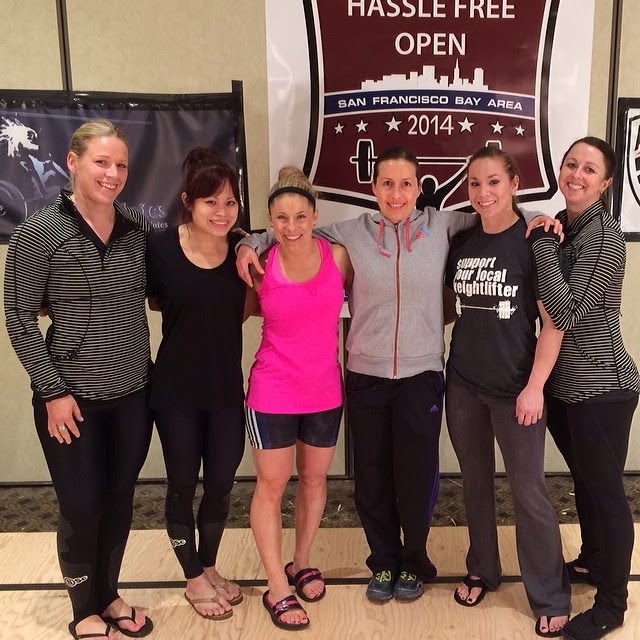 Last week we competed in the 2014 Hassle Free Open & Invitational, hosted by Kevin's gym in Foster City!  This meet was a step up from your standard local meet.  People around the US flew in for it as it was also a trial session for international competitions and hence, the invitational part.  The meet also spanned the entire weekend and was held at the Crowne Plaza Hotel.  This is the last meet the Catalyst team will participate in before Nationals in July!

To Lift or Not?
Three days before the meet, I had a fever of 103F.  Then, the Thursday leading up to the meet, my fever went away, but I developed a very bad cough... basically I'd cough every minute.  Up until the morning of the meet, I didn't know if I was going to do it.  I felt like under the weather, weak, tired, sounded like a smoker, didn't sleep well the night before because I coughed all night, and just felt outright sick.  However, I wanted to do the meet since it would be great practice and this was the last meet within 30 miles before Nationals.  The question that ultimately made up my mind was: if this were any other Saturday, would I go into the gym?  The answer to that question was yes, but I probably wouldn't go as heavy.  With that in mind, I texted Greg 'yes' and drove myself up to Foster City to lift for practice just like any other Saturday.

I didn't have any weight cutting issues this time around since I was sick.  Ironically, that was the least of my concerns this time around.  I was more worried about that fact I was going to lift sick, and how was I going to deal with my head when I don't do very well.  I was also worried about not being able to take a big breath before each lift since I couldn't do that without having to cough.  In addition, for this meet, I didn't set any goals or expectations for myself, other than to just go out there and do the lifts.  In fact, I was preparing myself just in case I bombed out.

The Mental Game.
I went into this meet with a completely different mindset from any other meets I've done.  This time, it was truly to go out there and do my best.  At the time, I felt like I had not a care in the world.  During warm ups, I was very calm and oddly, not nervous at all.  I just kept sipping my hot water and sports drink, did whatever Greg said, and blowed my nose, pretty much on repeat.  After Americans, I learned how important it was to hydrate.  I believe that and my calm mindset were the reasons why I went 5 for 6, PRed my meet total to 121kg, and came in 4th place, while sick!!!  I often miss lifts because I think too much.  Everyone else might have known this, but my experience at this meet was a true eye opener for me: if I could lift near my PRs and even PR while sick, then it's not the weight.  I am more than capable of lifting what's on the bar, even when it's near or at my PR.  The only thing stopping me is my head.  It's all in my head!

My personal goal for Americans was to total 120kg.  I didn't make that goal at Americans but I definitely came back and made it at this meet by a kilo!  Obviously, I'm happy I did the meet instead of staying in.  My snatches were money.  Clean and jerks were really tough since I couldn't take that big deep breath beforehand.  Cleans in particular were significantly tougher than they normally are.    It's all good though as I managed to finish strong with a meet PR of 68kg!  I'll take that, especially for a sick day!  But most importantly, I learned how important it is for me to truly believe in myself because I have it, not over-think the lift, STAY CALM and hydrate.

The Meet.
Each athlete has three attempts at each lift.  The Total is the sum of the highest successful lift for the snatch and clean and jerk. 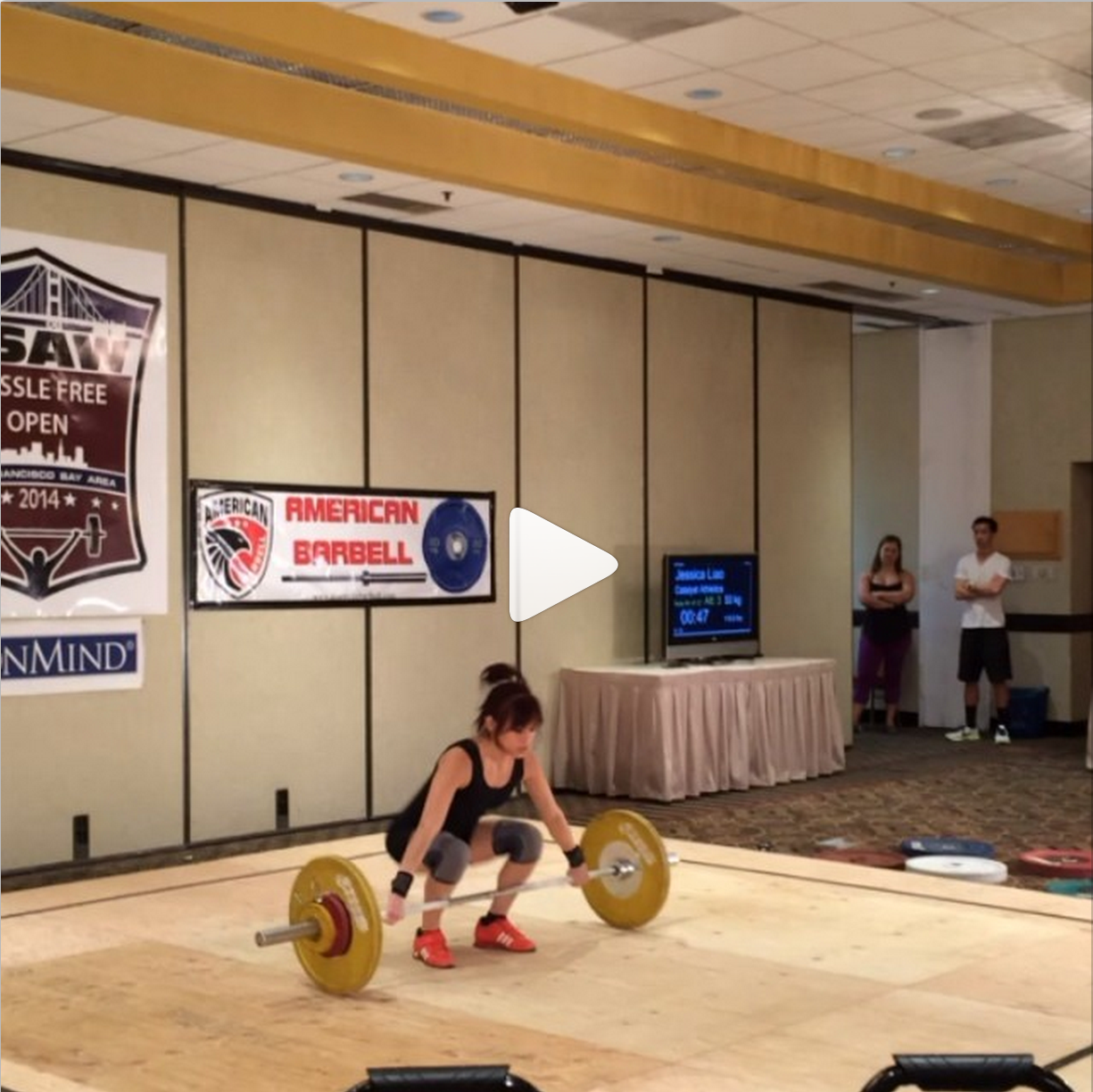 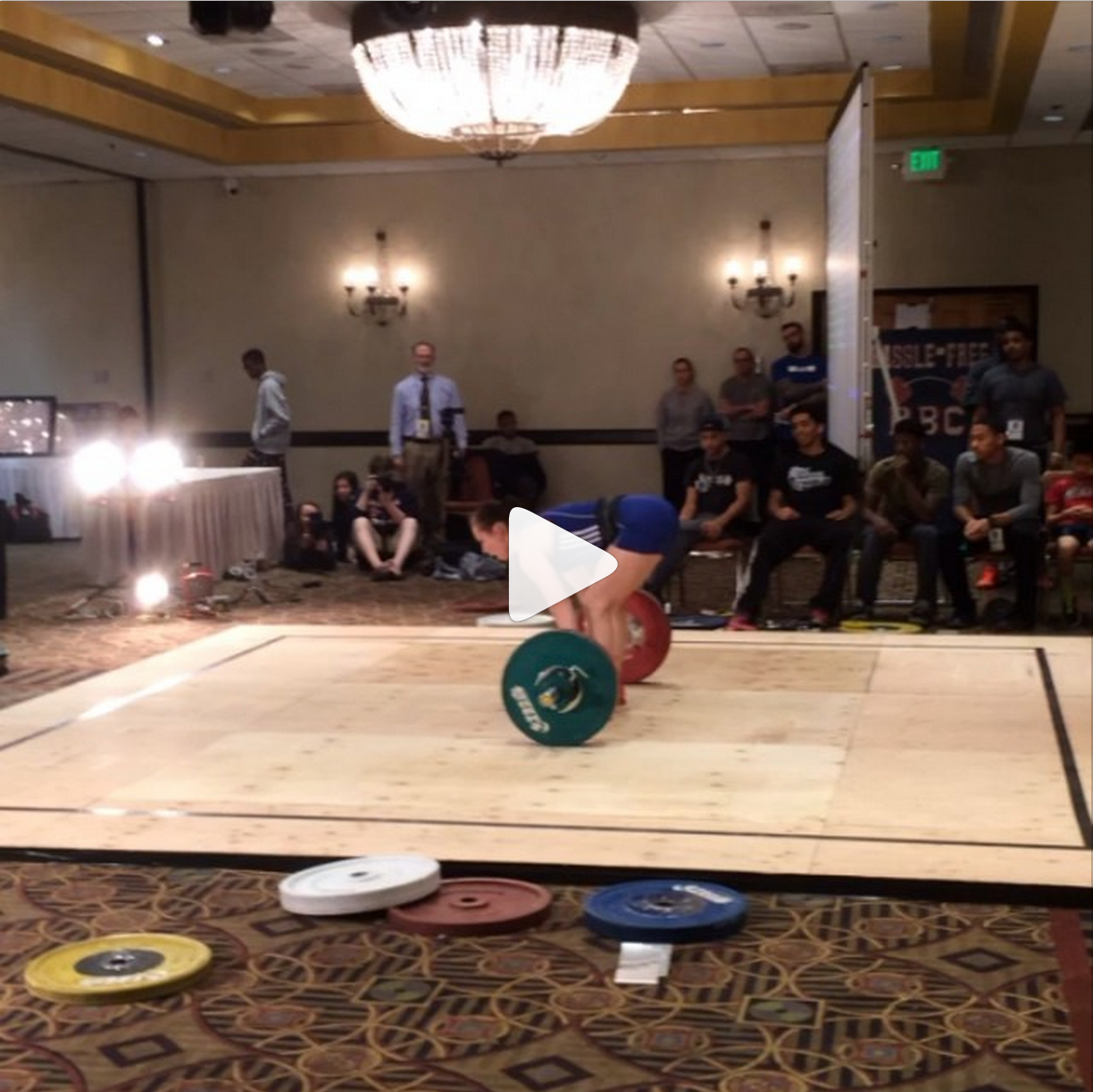 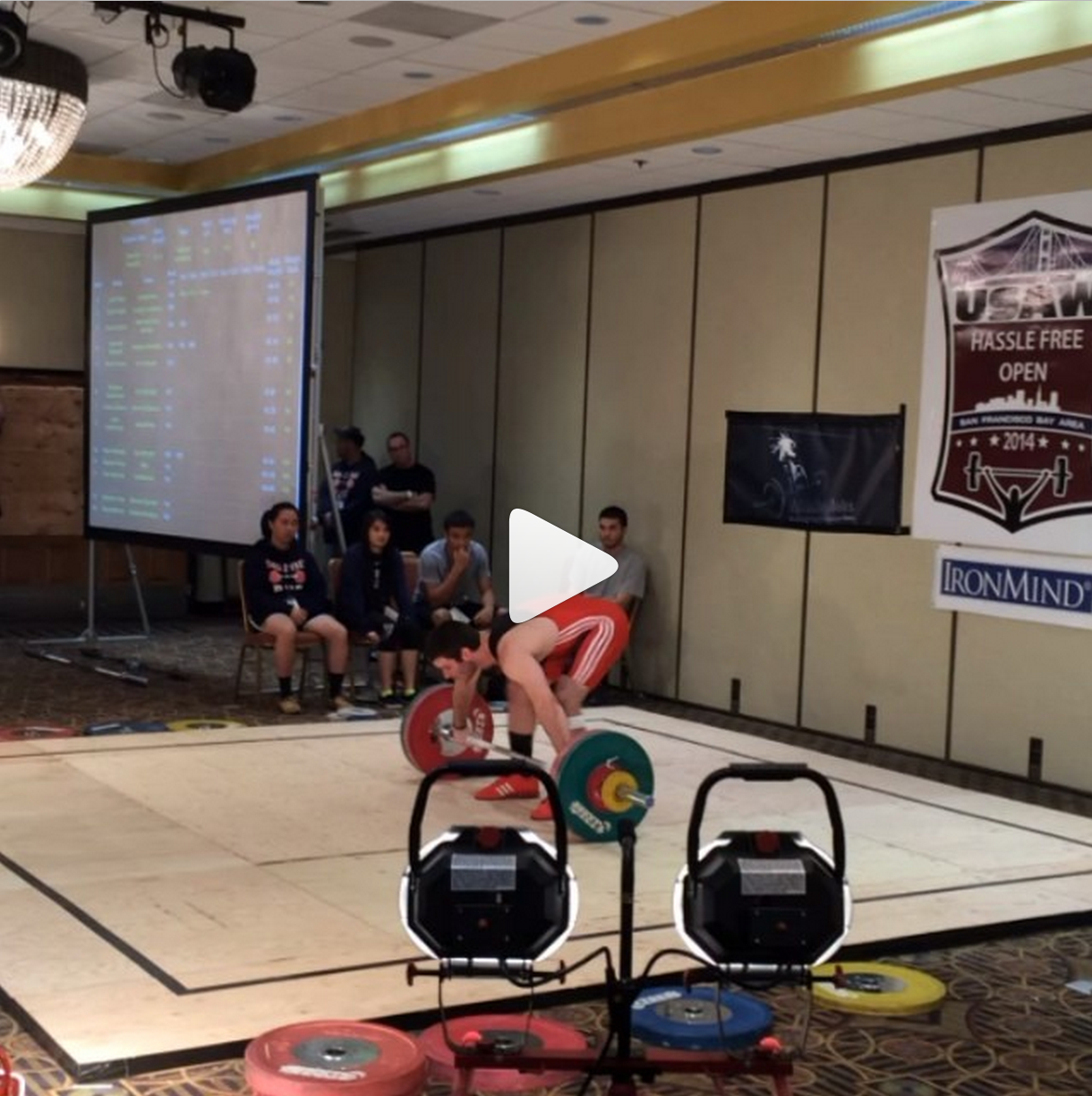 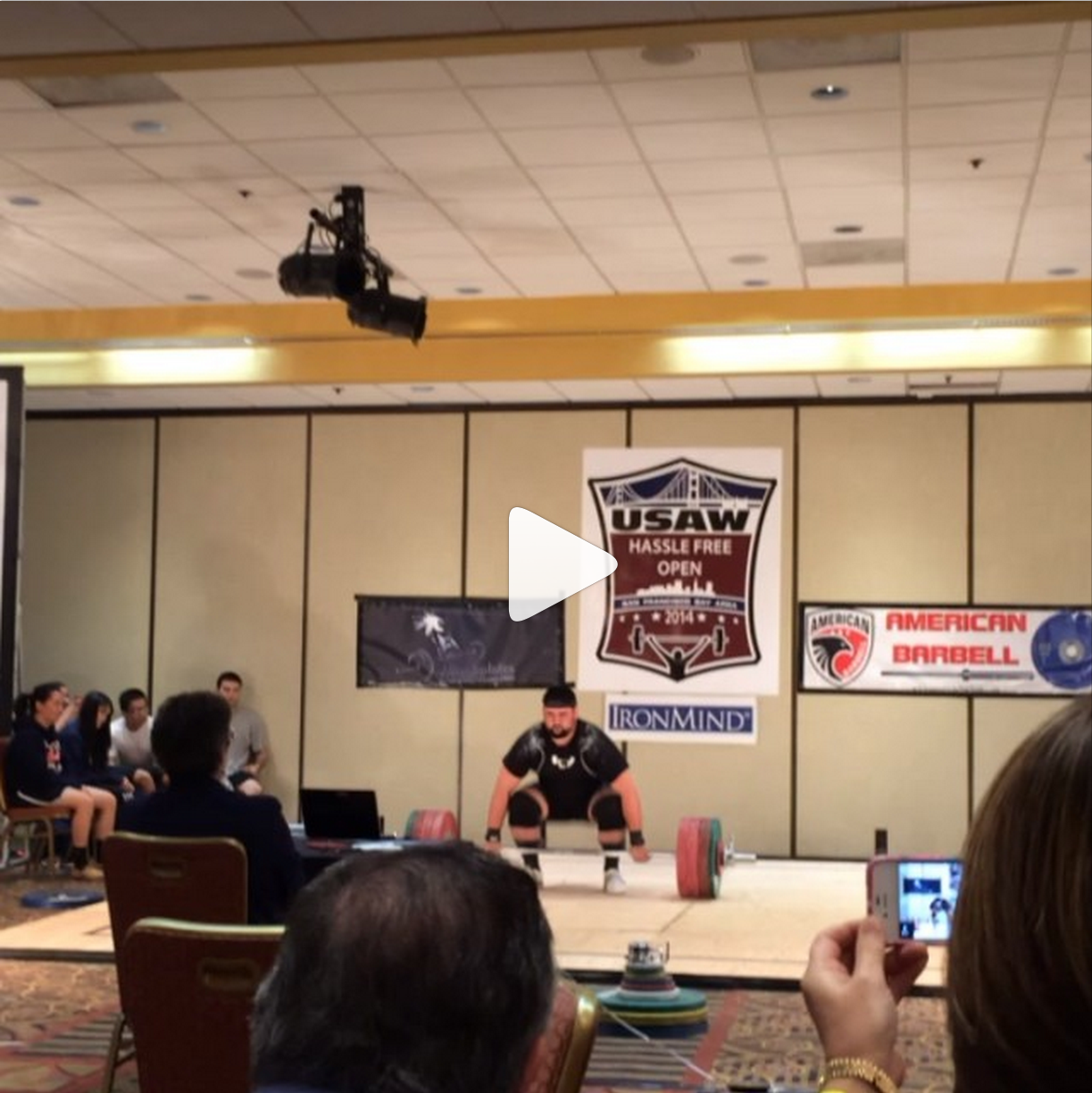 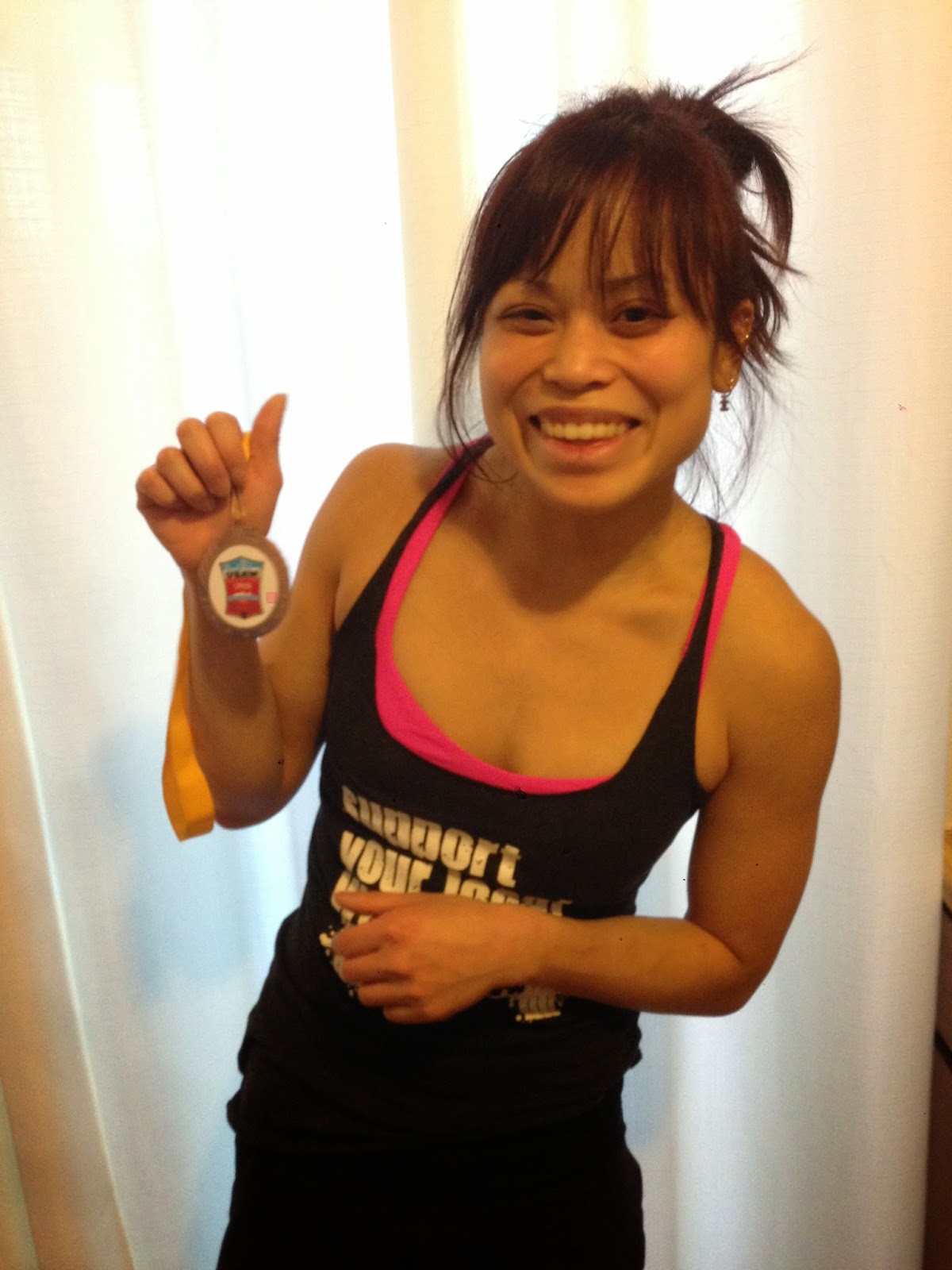 Great job to everyone who competed, especially to the Catalyst athletes: Alyssa, Danielle, Tamara, Spencer, Zack, and Brian!  Danielle and Brian are coming to Nationals!  Alyssa and Spencer made a lifetime PR on the clean and jerk!  And the team as a whole did very well too!

A special thank you to my coach, Greg Everett for doing what he does, and my platform buddy, Audra for helping me out in the warm up area!  Also to Russ and Claudia for coming out to watch me and taking videos, Colin for the support, Aimee, and the Catalyst team for cheering me on!

Now we're on a 12-week cycle until Nationals!  Until then!