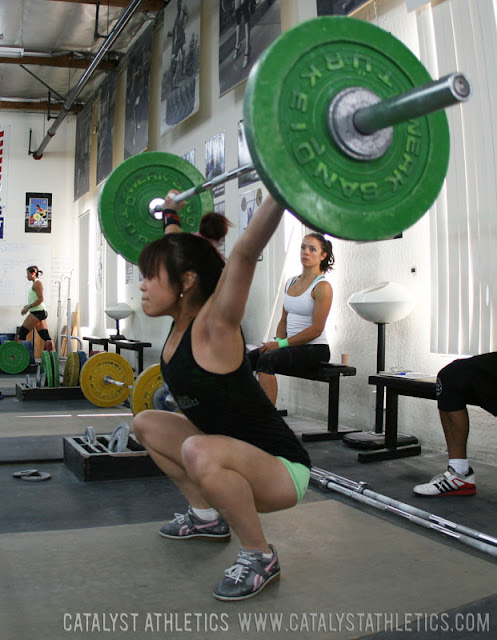 
Lately, I've been doing more Olympic weightlifting at Catalyst Athletics.  One of the most common feedback I got from coaches was "set your back!"  Soon enough, it was clear that my back strength was far behind and possibly even limiting PRs.  So about a month ago, Steve put me on their 4-Week Leg Strength Block 1 cycle and holy cow, it did wonders!

I've been on many squat programs in the past, since a lot of them are 2-3 times a week, and complemented well with the general CrossFit programming.  However, I haven't tried any weightlifting cycles, other than the general barbell club programming.  With my interest in Olympic lifting now, I cut down the CrossFit to focus on this cycle.  I was determined to rebuild my back strength and leg strength, especially after coming off of my hip injury.

TEMPLATE LOG FOR 4-WEEK LEG STRENGTH BLOCK 1: You can download the program on the Catalyst site: html | .doc.  The notation is a little different from CrossFit's, so please read their About page if you have any questions.

BACK SQUATS.  HOLY BACK SQUATS!  If you want to increase your back squat in a short amount of time, this is the program to do so since the emphasis is on heavy squats.  The most common review for this program is around new (and significant) back squat PRs.  The last time I peaked was about a year ago at Occupy Strength.  After the competition, I was able to tie my old PR of 195# several times.  However, when my hip started acting up, it hurt to back squat so I didn't do any.  When it recovered, I could barely do 185#, 10# less than my old PR.  My goal for this cycle was to tie my old PR and I truly thought that was going to be really, really tough.  Instead, I did 10# more than that, making my new back squat PR 205#!!!  I can't even remember the last time I PRed in anything by 10#.  And to top it off, I weighed in that morning at 47kg... the lightest I've been since the CF Regionals last year.  I couldn't believe it!  I am now 1kg off from a DOUBLE body weight back squat!

Setting My Back on Cleans.  When cleans get heavy, around 90%+, sometimes I start rounding my back because my back is weak.  After doing back squats and snatches for a heavy single, I PRed my clean by 1kg!  1kg may seem like a small increment but I feel stronger and my back was more set.  It's still a working progress but I'm glad I'm addressing the issue.

Oly Program + CrossFit.  I believe the program was designed to be standalone.  However, if you're going to try to do this program while doing CrossFit or another program, please note that it's tough to do it without burning out.  I don't know how your body would respond to doubling up.  For me, I doubled up, but I kept the emphasis on this program.  On the days with the optional conditioning exercises, I usually did the CF class too if the workout wasn't too crazy or long.  If you can, do the program before the CF workout.  The 5x5 and 8x3 back squat days were really hard on its own so no CF on those days.

Clean & Jerk + Snatch PRs.  The website says it itself, don't expect clean and snatch PRs on this program.  The focus is on leg and back strength.  If you PR your clean & jerk and snatch, that's awesome, but don't go into this program expecting it.  On the last day, when you go for a new max, you start with back squats.  The heavy single snatches and clean & jerks are done afterwards.  The cycle also has a lot of block cleans and snatches, which are really great for working that speed on the second and third pull.

Final thoughts.  There's brilliance in this program and I think it was so cleverly designed.  It's short, only 4 weeks, and yet somehow people experience massive PRs on their back squats.  If you look on the site, people added 30+ pounds!!... after 4 weeks!  I don't think I know of any other program with a similar result to time ratio.  The most common complaint of I've read about this program is about taper week, during week 3, as it can seem like you're not getting much done.  I was super antsy.  However, trust the programming, and do the taper week.  The outcomes are well worth it!


The results from this program exceeded my expectations.  Short time investment, and insane PRs.  Try it out, especially to those of you whose backs can use some catch up.